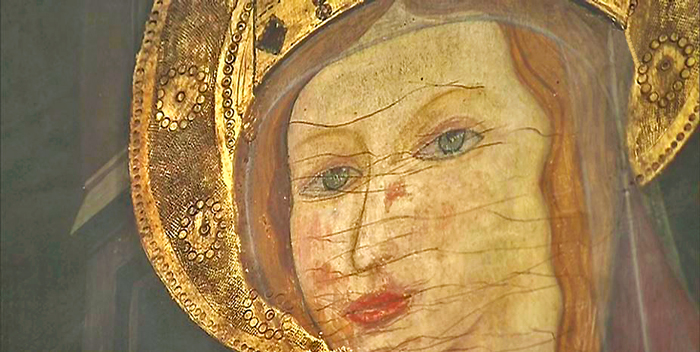 The panel was part of the main altarpiece of the Monastery of Veruela, a neighbouring town, and was moved to the church of Bulbuente on November 6th, 1542. But time had affected to its preservation which by the mid-20th century was unfortunate, what justified a restoration. It must be said that the restoration techniques of the 50s have evolved considerably in recent decades. The process ended up with a more saturated work, brighter and more intense in its colours, something that experts attributed to the decisions made on the pigments in the execution of the order, not very conservative with the original tones. Moreover, it seemed that with the restoration some of the inscriptions in Gothic letters distributed throughout the panel became illegible. A catalogue of the religious artistic heritage of Bulbuente concluded in 2012, points to this circumstance and to a restoration with “negative consequences” that affected the piece as a whole.1 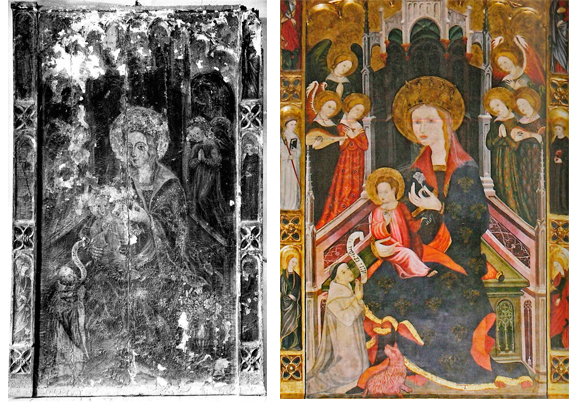 The restoration started at the request of the former parish priest, who commissioned the operation to José Bardolet Soler’s workshop. The panel was removed to take it to the workshop and later returned with this new appearance. Upon his return, the surprise was huge. Even the locals themselves said that the new painting did not look like the previous one. They all seemed to assume that the restoration had been deplorable, as some residents who witnessed the process commented today. Since the painting returned to the church, it has remained exhibited to everyone’s view during these 64 years. 2

However, this Gothic panel became the protagonist of one of the latest cases of counterfeits ever known in our country. After more than six decades on the walls of the church, the authenticity of the painting has been questioned. In February of this same year, the National Police Heritage Brigade contacted the diocesan heritage unit to request an examination of the picture, which soon revealed remarkable differences concerning its previous version. But why so much sudden interest to deem the work of Bulbuente as a fake?

The red flag raised when the owner of a Gothic panel of similar characteristics asked the Ministry of Culture for a definitive export permit for being sold abroad. The importance of the work, valued at 180,000 €, led to a query to the Museo del Prado, who reported that the piece matching the description provided was kept in the church of Bulbuente. We faced a contradiction: two works with the same description, and this could only indicate, either that both pieces were original, or that one of them was false. The police initiated inspections in Bulbuente to determine if the church’s panel was authentic, knowing that, according to the latest news about the piece, that was the place where the original should be. The examination, however, revealed what no one had imagined, that the painting was a recent copy, and that the original was the one belonging to the owner who asked for the export permit. The restoration work went far beyond expected, it had actually been the cover to hide a replacement that remained unnoticed all this time. The police keep the painting stored in the Diocesan Museum of Zaragoza for further technical studies to determine if this whole story is real. 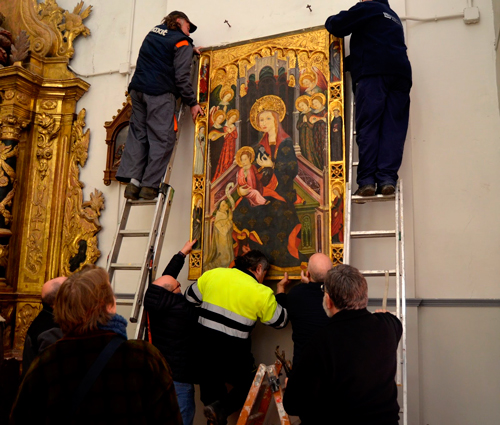 If José Bardolet Soler was behind all this, it is important to bear in mind that he was a dealer and antiquarian who often supplied himself with pieces from the area of Zaragoza that he then sold to collectors such as Frederic Marès and Jesús Pérez-Rosales. His activity, even before the Civil War, moved between the permeable contours of what is lawful and allowed in a context of limited regulation of heritage. Meritxel Cano, a researcher who has made an exhaustive follow-up of the career of the dealer, indicates that the theft would not be typical of his way of acting, but that a pretended sale, by getting a reproduction in return, would fit more into his practices. Indeed, in the parish registers the restoration operation is identified as a “painter-decorator” delivery contract, which implied the removal of the work for its transfer to the workshop and its return once the intervention was concluded. 3

We must not forget either that the current owner of the original acquired the work in good faith in 1980 in an auction house in Barcelona. His situation also deserves attention, since he was completely unaware of the provenance of the work and has held it for a long time as his rightful owner. For their part, in Bulbuente they demand the return of the piece to the church, from where it should never have left. The issue is delicate and as long as the authorities do not rule, we will continue to wait for the resolution of the case.

2 Bulbuente espera a su Virgen verdadera – Back to note 2