Guernica is one of the great masterpieces of the 20th century. The symbolic value of this piece, commissioned by the Spanish government to Pablo Picasso in 1937 to represent Spain at the Paris Universal Exhibition, surpasses the events that the painting itself was intended to convey. Josep Arnau, the General Director of Fine Arts at the time, along with other intellectuals and politicians of the moment, visited Picasso in Paris in January of 1937, and formally proposed to him the realisation of the work. The artist accepted, but by early April had not yet come to outline his work and the date of the universal exhibition was approaching.

The bombing of Guernica by German and Italian aeroplanes took place on April 26, and soon the news of the disaster crossed the borders of the peninsula. Although the Spanish civil war had broken out in June 1936, the atrocity of Guernica seems to have precipitated the motif of Picasso’s work. On May 1, the first sketches that approached the result we know today began, and only a week and a half later it was already working on his 11 by 4m canvas. Picasso did not miss the opportunity to use this huge work to draw the international attention on the conflictive situation that his native country was passing through. Today, the horrors and suffering associated with wars have been represented forever in this work, a symbol of the armed confrontations that took place during the last century; a permanent reminder of human errors.

Despite having been commissioned by the Spanish Republican government, the work did not reach Spain until 1981. The context of civil confrontation in Spain and the outbreak of World War II seemed to advise against the entrance of the piece in the peninsula, and the interest that Picasso aroused in the art world led to the organisation of a series of international exhibitions of which Guernica was the star. 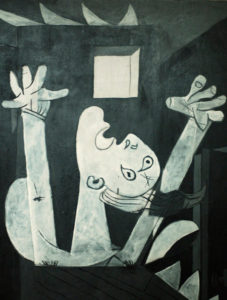 After had tourned around Europe for two years, Picasso expressed a wish to deposit the painting in the MoMA in New York until the situation in Spain became more stable . Thus, in 1939, Guernica could be seen in the halls of this important museum, from where it temporarily left for various exhibitions around the world, and to which it returned in 1958. In the same year, Picasso renewed an indefinite loan with the MoMA, so that the picture would not enter Spain until there was a democratic system there1. The artist passed away without seeing his great work exhibited in his native country.

The efforts to get the work exhibited in Spain, however, began long before there was a trace of democracy in the country. In 1968 began the so-called “Operation Return” by direct will of Franco, who commissioned to Carrero Blanco the necessary steps to obtain the piece; but Picasso flatly refused. Nevertheless, these movements on the part of the government of the time motivated that Picasso, either by precaution, or by a desire to clarify his will, addressed in 1970 a letter to the MoMA insisting that the painting, and all the pieces that he had left in the museum, did not return to Spain until a system of public freedoms was established, something whose valuation entrusted to his lawyer Roland Dumas, and remembered that the museum would fulfill his commitment of return. In 1971, on the occasion of the 40th anniversary of the proclamation of the Republic, Picasso reiterated this idea to the museum saying literally that the work will return to Spain when the Republic was reinstated. 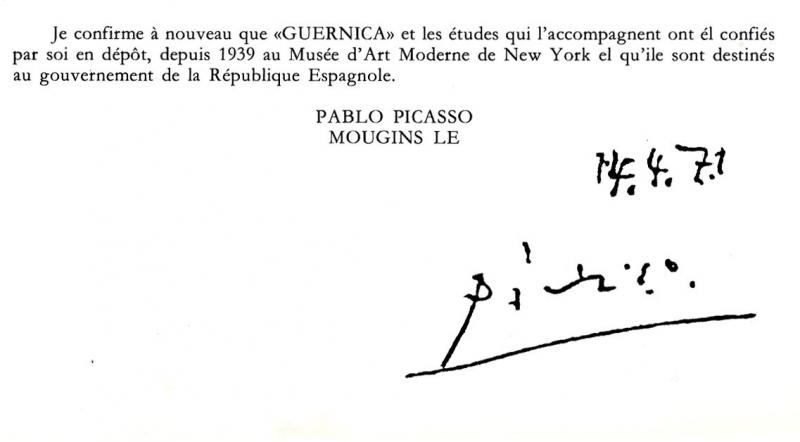 After the artist’s death in 1973, the government made several attempts to bring the piece back to the country, obtaining in every case a negative response. Certainly, MoMA should have no interest in losing this work of its exhibition halls, but it was also true that the conditions imposed by the author for his return were still not met, and there were several Picasso’s handwritten documents that reflected it. Franco died in 1975, which provoked a redoubled effort to get the painting, and when the bombing of Guernica turned its 40th anniversary in April 1977, the entire town expressed its wish to have this work back. Jacqueline Picasso, the widow of the artist, echoed these claims and in a letter of the 27th of April 1977, went to the people of Guernica to tell them that he shared his pain and suffering, and that she agreed that the piece should return to the country, although it must be placed for exhibition in the Prado Museum by express wish of her husband2. 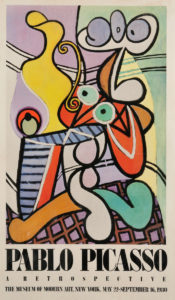 In June of that same year, the first democratic elections in the country took place, and the subject of the Guernica continued to be a point of enormous interest. Thus, on the 19th of October, the Senate approved a formal request of return addressed to MoMA. Despite this, it would take almost four years until the museum signed the return agreement. In the meantime, there were disagreements with the heirs of the artist, who claimed rights over the works that accompanied the painting or said that they had decision power over where to exhibit the painting. It is necessary to point out the crucial role that had the payment invoices issued to the artist in 1937, moment when the work was commissioned, to justify the ownership of the Spanish State3.

In turn, in the United States, an express pronouncement of Congress was required authorising the return of the painting in 1978. The text referred to the agreements of friendship and good relations which the American government had signed with the Spanish government in 1976 as well as the desire for Spain to continue its path towards the establishment of a democratic system. In addition, the statement refers to a supplement to the agreement in which both nations pledge to cooperate especially in the field of culture and education, to finally establish that “Guernica should, at some point in the near future and through appropriate legal procedure, be returned to the people and Government of Democratic Spain.”4 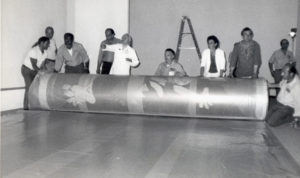 In the middle of an enormous secrecy, and after having concluded a retrospective exhibition of Picasso that the MoMA organised as a farewell, the Guernica was taken down on the 9th of September, 1981, after a Republic, a Dictatorship, a Democracy and a new Constitution on its shoulders. It was deposited in the Cason del Buen Retiro, annexed to the Prado, until the works of the Reina Sofía Museum were completed, to which it was transferred in 1992 and where it is still in a permanent exhibition. Throughout this period, the painting went through 45 transfers, visited 30 cities and suffered 88 rollings5, a considerable deterioration given the dimensions of the canvas.

In the history of this work, close to reaching its 80 years of life, there is a deep political account from the very moment of its conception, and a later development that motivated its forced exile. That Guernica has become a symbol of the suffering associated with the war should not be surprising. Beyond the rawness of representation itself, every moment in its travel and exhibitions itinerary gave an account of the situation of Spain and Europe; and this is something that, unfortunately, is still of current interest in our days.