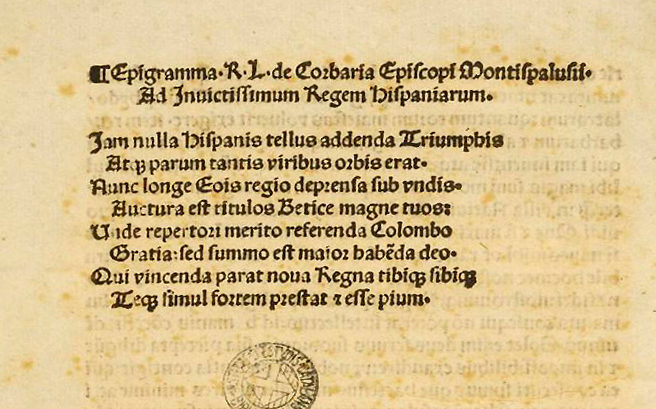 Last June 6th, 2018, a ceremony at the Embassy of Spain in the United States, in Washington, took place to return one of the incunabula copies of the Charter of Christopher Columbus, printed in 1493, stolen years before the National Library of Catalonia and found and seized by the North American authorities.

The story of this document seems a spy novel since it brings together all kinds of factors: mystery, theft, counterfeiting, smuggling, shady business, international projection, money and, above all, fascination.

Christopher Columbus wrote this charter (‘Columbus Christopher Epistolae of Insulis Indie supra Ganger nuper inventis’), on March 4th, 1493 to the Catholic Monarchs after returning from his expedition trips across the American continent to record his voyages and findings. The letter was sent to print several times and with a variable number of copies, to distribute it in Europe and spread the discovery of the New World. The first printing took place in Rome, in 1493, in the workshop of Stephan Plannck, of which ten editions were made. Another six were printed between 1494 and 1497. Of some of these sixteen editions only one copy remains, and in total it is believed that there are only 80 left throughout the world.1

The investigation began in 2011, when the Homeland Security Investigations (HSI) unit in Wilmington, Delaware, and the and the Delaware U.S. Attorney’s Office got a tip about the suspicion that an original copy of Columbus’s letter could be in the United States. The alert sprang when a rare book expert was required to authenticate a copy of the letter. Incidentally, he himself had examined one of the copies kept in the Vatican the previous year and certain details raised a red-flag upon its authenticity. When analysing the document, he was able to verify that it was an original and that the copy of the Vatican ought to be a forgery. One of the key details was the sewing of the paper sheets and their match with the binding perforations2, which differed from the Vatican document. This information opened a multi-year investigation into the theft of several copies of the charter from different European libraries that would have been replaced by counterfeits and commercialised in the United States.

Indeed, one of the copies had been stolen from the Riccardiana Library in Florence. As stated by its director, Fulvio Stacchetti, the theft could have happened between 1950 and 1951 when the library let the document in a temporary loan for its exhibition in Rome, since it was the only time the copy got out of its premises. Since then, no one had perceived that the copy was a fake. The original went through several hands. It was acquired by a Swiss collector in 1990 and resold at an auction in New York two years later for $ 300,000. According to the authorities, the last owner donated the copy to the Library of Congress in 2004, where it stayed for twelve years. In the course of the investigation, it was proved the provenance of the donated copy and that the document kept in Florence was false. Finally, the letter was returned to Riccardiana Library in May 2016.

A similar story was the one of the copy as mentioned above, stolen from the National Library of Catalonia. This document was replaced by a high-quality forgery without anyone noticing the trick for a long time. The thieves also invested efforts to erase the traces of the provenance of the copy, and even applied bleach to eliminate the seal of the library. Also, they only replaced the original pages, bound in the 20th century with hard leather covers, which made it more difficult to detect the exchange.3 We cannot know exactly when the theft took place, but it is certain that the original was sold in November 2005 by two Italian dealers of rare books for € 600,000, and resold in 2011 for € 900,000. The current holder of the letter, which remains anonymous, agreed to return it after lengthy negotiations with the Delaware District attorney in 2014. After a period of custody by the authorities in order to confirm that the sized copy was really the one stolen from the library, they agree to return it to Spain.4

And as if this were not enough, a third copy of the letter kept in the Vatican archives was also stolen and replaced by a high-quality counterfeit. Robert David Parsons acquired the original document in good faith for $ 875,000 from a New York dealer who sold it in an auction in Atlanta in 2004. We don’t know for sure who the first dealer who introduced it in the United States was, but the name of Marino Massimo De Caro is shuffled, a thief of books well known by the HSI.5 The buyer of Georgia died in 2014 and when his widow, Mary Parsons, was informed of the illicit origin of the copy, she agreed to return it immediately. This copy entered the archives of the Vatican as part of a bequest of rare manuscripts and books that the Italian bibliophile Giovanni Francesco De Rossi gave at his death in 1921.6 The original copy was returned to the Vatican on June 14th this same year, in a ceremony that took place in the library of the Pontifical City.

This is the third case of restitution of copies of the charter of Christopher Columbus within two years in which American authorities have cooperated. It is not known with certainty if the thefts are related to each other, but one might think so, given the great similarities. This is just a case out of many in which the most prominent copies of European libraries become targets for antiquities dealers. As the director of the Vatican archives pointed out, security was relatively lax before the reform of the library undertaken in 2007. Examples can be mentioned as books with missing pages taken out or, as in the present case, finding a replica instead. The quality of the counterfeit, however, seems to point to a professional network. If Marino Massimo De Caro is the one behind this network, it is important to bear in mind that he was the director of the Girolamini Library and that he took advantage of his position to traffic in numerous bibliographical treasures that he stole and sold during the performance of his post. It was with his arrest in December 2013 when authorities knew that, in cooperation with a team of up to 13 people, he had stolen more than 4,000 copies of books, manuscripts and unique copies not only from the Girolamini Library, but also from the Chapter Library of Verona, Monte Cassino and the Ximeniano Observatory Foundation, in Florence.

6 Vatican Gets Back Stolen Columbus Letter, but Case Remains a Whodunit – Back to note 6