When we visit a large museum that houses world-renowned works, it is common to find in its halls some artists who practice their skills copying the great masters. It is inevitable not to contemplate how this beautiful process develops and to pay attention to the details that the copyist decided to reproduce. This live experience makes us aware of how much it takes to undertake a painting, of the years of study needed and of the dedication that being a good artist requires.

But beyond this, it makes us wonder how one gets permission to enter with all the stuff in the museum and settle in the middle of the show-rooms, loaded with canvas, easel and brushes, to copy a masterpiece. Can we copy everything? What purpose can have the copy? Are there any restrictions? Can everyone get permission? These and other doubts surround this academic practice, and although it may not seem so, it is a matter regulated in great detail.

The Prado Museum was born with a clear vocation to hold masterpieces of painting and to be a training centre for future artists. At the time of its opening in 1819, the building was closed for cleaning one day a week, opened to the public only on Wednesdays and the remaining five days were available for students of the academy and artists to study the history of the painting and to make reproductions, behind closed doors1. This purpose of the gallery as a centre open to the study and the development of educational programs remains a defining objective of its mission.2

Given the importance of this educational function, the first official regulations soon emerged to rule this issue and replace the first norms that had a purely internal scope. In the old 19th-century academicism, copying the great masters was seen as the most natural and effective way to learn the different pictorial techniques. The copy had an essential value in the process of education of the artists, and the result of their works was widely appreciated. Proof of this is this news published in El Liberal in February 1915:

Other news published in the ABC on April 9th, 1942 records 246 copies made in 1940 and 397 the following year. In this report, the journalist interviews one of the officials of the institution about this practice, who explains “Velázquez, Rafael and Murillo were sold a lot abroad before the war. There were always thirty copyists in Velazquez’s room, and others waited for their turn. The foreigners who visited our museum, influenced by the spell of our masterpieces, ordered copies. Today, despite the foreign market being paralysed, there are many commissions”. He also relates that copyists from all over the world come to the museum and that a copy could exceed a price of 2,000 pesetas.4 We see, thus, that the making of copies had, in addition to an academic function, a commercial purpose, and that many reproductions were the result of commissions to painters who were gradually building up their reputation, beginning by emulating the great ones, as it was the case of Sorolla or Madrazo.

But how was this practice regulated? The first guidelines for copying were enacted in 1860 with points of practical nature and conservation for the original works, as they could not be taken down at the request of the copyist unless expressly authorised by the museum director in exceptional cases. It was not possible either to draw grids on the originals to take references and proportions for the copy, or it was not allowed to apply oils or lightening substances to see better the details. The regulation of 1863 includes for the first time the requirement that the original and the copy cannot be of the same size, a point maintained over time and that today is set at a minimum difference of 5 cm side (time ago, it was of 3 cm), in addition to a maximum size of 1.30m. Likewise, the Museum Regulations of 1897 included the possibility of exhibiting these works. Thus, Article 34 established “In order to promote the interests of copying artists, a place for exhibition and sale will be allocated where each copyist can display a painting.”5 Although this exhibition room for copies was closed in 1913, copies continued to be sold, as evidenced by the news of later decades that openly spoke of this practice.

José Lázaro Galdiano next to a copy of Las Meninas.

The regulations enacted after those early guidelines of 1860 went into detail on how to manage permissions, applications, the requirements of copyists, the conditions of performance, the measures of exhibition and the destination of the reproductions. The regulations of 1876, 1897, 1901, 1909 and 1920 include rules applicable to copyists that refer to the supervision of the entry of work materials by hall-supervisors, the granting of permission by the director of the museum, the obligatory nature of keep a good behavior, the prohibition of one copyist usurping the place of another, etc. There was an interesting distinction between making a copy of a complete artwork, for which in 1909 the licence had a cost of one peseta, and reproductions of small parts, considered only work of study and was exempt from payment. Likewise, it must be borne in mind that the permit is designed for already recognized artists (awarded in national or international exhibitions) or students of public academies of artistic education. Out of these cases, the licence had to be valued personally by the director to determine whether grant it or not. Besides, it should be noted that in the first years of the museum, applicants must also demonstrate good behaviour and provide the recommendation of one people of the Court, plus, of course, to have a certificate of artistic aptitude to undertake the copy.

With the regulation of 1920, the matter was regulated almost definitively, except for some later modification introduced by the Regulation of the Royal Board of the Museum of June 30th, 1993. Among the changes, it is worth mentioning the prohibition to copy some works because they are the most visited of the museum and the installation of the copyist in the room would be a hindrance to the public. This is the case with “Las Meninas”, “El Jardín de las Delicias”, “La Maja Vestida” and “La Maja Desnuda”.6 Likewise, all the reproductions made are scanned and documented in the archives of the museum so that no copyist can get to pass them as an original. Only one copyist per room is allowed, so as not to obstruct the visits, and a copy at a time so that the same artist cannot be copying two works at the same time. And although the copy permission lasts one year, the reproduction must be completed within six to seven weeks, unless there is an express extension. 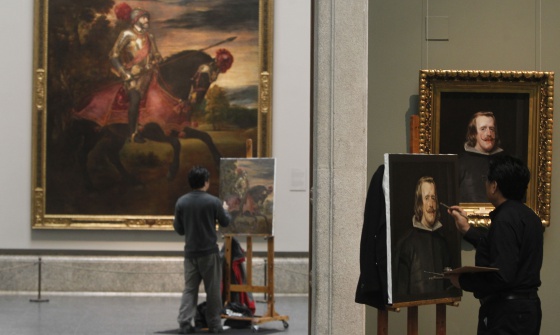 Since then, the process has not changed substantially. The candidate must send a request to the Office of copies of the museum, along with his CV and a portfolio of his work, as well as a letter of recommendation to support his work. Approximately 30 applications are taken per year, a number much lower than a few decades ago. In 2016, for example, only 45 copies were made.7 But this practice is still alive, and the archives of the museum give a good account of the multitude of authors who have passed through its galleries, some of them ended up later hanging on its walls. Consultation of these registration books allows us to know the fundamental role that such an institution has to the art world, to the education and the dissemination of its collection.

2 The goal of the National Prado Museum is to achieve the following purposes (Article 3 of Law 46/2003, of November 25th, regulating the Prado National Museum): “To promote and guarantee access to the public and facilitate its study to researchers. Promote knowledge and dissemination of the works and the identity of the historical heritage attached to the Museum, favouring the development of education programs and cultural outreach activities” – Back to note 2